You’ll get a wide variety of responses if you stop people on the sidewalk and ask them about their favorite Mexican food. Tacos! Burritos! Chimichangas! Fajitas! The list could go on and on. 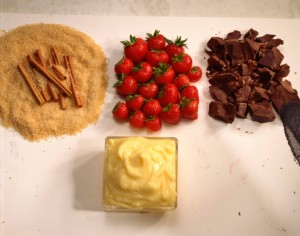 While most people are familiar with Mexican tacos, enchiladas and tortillas, the wide variety of Mexican desserts is less well-known. The Mexican dessert repertoire includes cakes, puddings and cookies. Fruit and chocolate are also commonly served.

Before the Spanish conquistadors conquered the Aztec empire in Mexico, food was eaten broiled, boiled, steamed or eaten raw. Nothing was fried in oil until the Spaniards imported pigs. Then the indigenous people in Mexico began to use the oil and to fry certain foods. Some of the now traditional Mexican desserts come from earlier Spanish recipes made using native tools and cooking methods. Even now, though, most Mexican desserts are not fried. One exception is “crema frita.” This is a thick custard that is sliced, rolled in flour, bread crumbs and eggs, and then deep-fried. It is served with honey.

Dessert is the last course of the comida, the main meal of the day which can have up to six courses in all. The main Mexican dessert is usually a pudding, a custard, or a cooked fruit dish. After this, coffee and fresh fruit follow. Foods that we might serve as a dessert are also eaten at other times of day. Fruit, cookies and sweet rolls are breakfast foods. There is also a mid-afternoon snack, the merienda, which includes hot chocolate, sweet rolls, cookies, cakes and atole, a type of corn porridge. This atole is eaten with sugar, milk, eggs and fruit.

If the Mexican dessert is called a “dulce,” which means “sweet,” it is probably a pudding. There are coconut dulces, sweet potato dulces, pineapple dulces, banana dulces and almond dulces. Dulce de Pan is a bread pudding. Many of these pudding recipes call for sherry or another sweet white wine. Helado is a frozen dessert like an ice cream or a sorbet. Hazelnuts, mangoes and watermelon are flavors of helado. There is also a frozen Mexican dessert called “vino tinto,” made from a sweet red wine. Tortas, or cakes, are made from carrots, chick peas and cantaloupe.

A traditional dulce from the Mexican State of Oaxaca is a chick pea and pineapple pudding, “dulce de garbanzo y pina.” Desserts from Guadalajara are flavored with molasses, lemon juice, anise and raisins. In the more tropical areas of southern Mexico, bananas are a staple dessert ingredient.

An assortment of sliced fresh fruits are available for dessert in Mexico. They are also sold on the streets by the vendors. Many Mexicans sprinkle hot red chile powder on the fresh fruit before eating it.

A final category of Mexican desserts to consider is candy, “bombones.” Mexicans introduced the world to chocolate which they drink, use in candy, baking and in savory meat dishes. They also make caramel candies that are rich in milk. Another caramel candy-like dessert is yemitas. Beaten egg yolks are mixed with sugar and then boiled. After they cool, they are dipped in a sticky syrup before being served.

It’s possible that you’ve also heard of Mexican wedding cakes, which are a type of cookie, but don’t be fooled into thinking those are an authentic Mexican dessert. Those treats originated from Medieval Arabic cuisine. According to Food Timeline, these cookies were brought over to our continent in the 16th century by European explorers. They became known as sugar cookies in the 17th century, and it wasn’t until the 1950s that the term “Mexican wedding cake” appeared in cookbooks.  Because Mexicans make them, you may choose to call them a Mexican dessert if you like; however, they are also made in homes in Sweden and Australia, among other places, and their name depends on the country.

As you can see, there is much more to Mexican desserts than most Americans typically experience. Don’t be afraid to do some research of your own and try some Mexican dessert recipes at home!  You can also stop by any of our 3 Mexicali locations in Massachusetts to try our selection of Mexican desserts, including the traditional favorites as well as an apple burrito. It doesn’t get better than apples and cinnamon rolled in a flour tortilla, lightly fried, then covered with caramel sauce and whipped cream!