Most of us in America are familiar with Halloween, however many aren’t aware of its Mexican counterpart, the Day of the Dead. 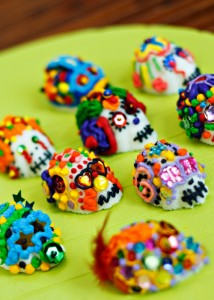 As a unique Mexican tradition, Day of the Dead casts a new light on how people view the departed and use these days to celebrate their lives instead of mourning them.

The Mexican holiday of Día de los Muertos, or Day of the Dead, takes place over the first two days of November. Its origins are a mixture of Native American traditions and a set of Catholic holidays.

While the holiday’s observances include spending time in cemeteries, making shrines to the dead, and displaying artistic representations of skulls and skeletons, the occasion is festive, rather than morbid. Death isn’t seen as the end of one’s life, but as a natural part of the life cycle; the dead continue to exist much as they did in their lives, and come back to visit the living every year.

The names of two consecutive twenty-day months on the Aztec calendar, Miccailhuitomi and Miccailhuitl, can be translated as “Feast of the Little Dead Ones” and “Feast of the Adult Dead.” Put together, they appear to have formed one long celebration of the dead, moving from those who died as children to those who died when they were older.

In the early 1500s, Spanish conquistadors, led by Hernando Cortéz, conquered the Aztec Empire, taking over the area we now know as Mexico. They immediately set about trying to convert the native population to Catholicism, for both religious and political reasons.

Among the practices introduced by Spanish missionaries were All Saints’ Day and All Souls’ Day, taking place on November 1 and 2, respectively. The conquered Native Americans took the opportunity to incorporate their own traditions for honoring the dead into these two days. The resulting holiday is a unique hybrid of the two.

It is generally believed that the souls of one’s family return home to join in the Day of the Dead festivities. First those who died in infancy come home, then the older children, and finally those who died once they’d reached adulthood. Families set up altars (or ofrendas) in their homes, festively decorated in bright colors and laden with the favorite foods of their dead. Typically, the altars contain photographs of the dead, representations of things they liked, and items representing the four elements: candles for fire, drinks for water, fruit for earth, and fluttering tissue-paper decorations for wind. The dead take in the essence of the food, which will later be eaten by the living.

In some areas, families go to the graveyard to celebrate through the night. They clean and decorate the graves, sometimes setting up ofrendas on the gravestones, as bells are rung.

The major feature of Day of the Dead decorations is skeletons, or calacas. Skeletons are everywhere, from tissue-paper scenes to tiny plastic toys, from cardboard puppets to ceramic sculptures, from posters to papier mache. These skeletons are usually cheerful, and they are designed to show the full range of activities and professions people perform. Farmers, barbers, secretaries, fire fighters… if somebody does it while alive, you can find an artistic rendering of a skeleton doing it while dead.

This theme extends to the day’s food and treats. The Day of the Dead feast typically includes a special egg-batter “bread of the dead,” pan de muerto. While the form of this bread is different from region to region, it is often decorated with strips of dough resembling bones, or made to resemble a dead body.

Also common are skulls and skeletons made of sugar or candy. Some people get sugar skulls made to resemble themselves, or with their names inscribed on them.

Tone of the Holiday

While Day of the Dead and Halloween are both offshoots of All Saints’ and All Souls’ Days, their tone couldn’t be more different. Halloween’s images of skeletons and spirits emphasize the spooky, gruesome, and macabre. People shudder (if delightfully) at the thought of scary spirits threatening the living world. On Day of the Dead, the focus isn’t on impersonal threatening spooks, it’s on celebrating with one’s family—alive and dead—and remembering those who are no longer alive. It’s on seeing death as another stage following life, not something to be faced with fear.

As you can see, Day of the Dead uses similar icons that we normally associate with Halloween yet projects them in a more optimistic kind of way. Not only does Day of the Dead seem to be more uplifting to view the dead in this light, but it is also more comforting. Yet Halloween and Day of the Dead do have something in common: they are both celebrations. Whether you choose to dress up in a costume on Halloween or dress up an alter on Day of the Dead, either way it displays a fun annual tradition.

How will you be celebrating Day of the Dead? If you don’t know how to get into Day of the Dead spirit, we can certainly help. Come down to Mexicali Grill in Spencer, Massachusetts, or our sister restaurant, Playa del Carmen in Holden, MA, and taste the tradition that Day of the Dead brings with it.